And the fact that such an experienced rope technician as Michal doesn’t know the “Polonez knot” led me to write an article about it. I first met this “knot” sometime around 2001 when I saw Mates tie it.That knot immediately caught my eyes. I just didn’t know its name. Later on, when book Speleoalpinism I. and II. came out, I found its name was “Knot Polonez”.
In Mates’s publication, it states that it is a knot for rebelays, and it does not have the ability to absorb shock loads. And that in addition to easy check, its “main advantage is the speed of tying and untying after loading” [1; chap. 4.1]. To be honest I can’t agree with Mates on the last point. I used to use “Poloneze” a lot some time ago. Even so often and so intensely that it earned the nickname “Ondrej’s stupid knot” from my fellow companions, with whom we went to the caves on Kanin (Monte Canin).

One of the reasons why, is the contradiction with Mates’ knowledge. Untying Polonez after loading on a narrow carabiner (narrow within the meaning of the ratio of major and minor axis, i.e. oval class Q, so-called maillon, or class X, or oval class B), especially if four people have passed over, is quite difficult. The use of the trick shown in Fig. 9 works on clean and new ropes and on wide carabiners, but on hard and dirty ropes and narrow carabiners its efficiency decreases. So in cases where it cannot be untied in suspension when dismantling the rigging, the rope technician must pack the rope straight into a bag, otherwise he would pull the rope up with a carabiner (if he succeeds in removing it from the anchor point).
Another negative finding is the amount of rope in the carabiner, because there are three strands of rope (the upper one almost perpendicular to the two below). And this makes it much more difficult for (especially, but not only) narrower carabiners to untie them after loading. At the same time, it reduces the space for the carabiner of cow’s tail when passing a rebelay. And at a time when I used maillons (quicklink carabines) to save money and space, it was all the more than obvious.

Indeed, the problem with the lack of space in the carabiner, especially when using ropes with a diameter of 11 – 12 mm, is also mentioned by Kocour in his article on knots. Like Mates, he highlights easy tying and easy untying of Polonez, and mentions the disadvantage of lower ability to absorb shock force. At the same time he adds that if there was at least 10 m of rope above the failed anchorage (rebelay), the elasticity of rope would compensate for the lack of knot [2 , pp. 63 – 64].

Anyway, the benefits of this “knot” far outweigh its shortcomings, either factual (inability to absorb impact forces) or subjective (easy × difficult untying after loading). These include:

And last but not least, it’s not out of the question to explain the quotation marks. The term “knot” in the case of “Polonez” is not entirely appropriate, because it is essentially a hitch.
What about Polonez? Our cavers got acquainted from French colleagues with the knot, which the French called “nœud polonais“. No one doubts that “nœud” is a “knot“. Just that “polonais” is not “polonez”, but it means “Polish.” And if one does not believe, the English version of the caving bible Techniques de la spéléologie alpine states the name “Polish knot” [3; p. 73]. So the correct name should be “Polish hitch“. But the name “knot Polonez” sounds good, doesn’t it? 😉 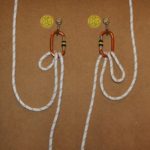 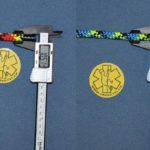